According to what is learned, the sub-brand of OPPO is about to release a device called “Realme V13” on the market. The aforementioned device is expected to feature a 90Hz display and a MediaTek Dimensity 700 processor . According to the latest rumors, it will arrive on March 31st .

It is not uncommon for phone manufacturers to have certain models exclusive to select markets. Realme’s V series of smartphones is one example and is exclusive to China. The Asian manufacturer plans to announce a new terminal next week which will arrive with the moniker Realme V13 .

The device will arrive two months after the Realme V15. It has a design that can be called a mash-up the latter and the Realme V11 5G. In the front, it has a selfie cam panel embedded in a hole in the left corner like the previous model, while the back with its camera housing is similar to that of the device announced months ago. 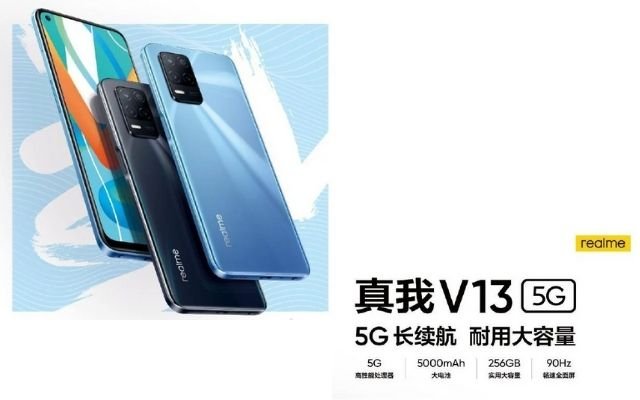 The poster shared above on Weibo by a user called ” Arsenal ” shows that the V13 will have its hole in the upper left corner of the screen. We do not know the type of screen, although we can see that it has a side-mounted fingerprint scanner; from the promotional teaser we only know that the display will have a 90Hz refresh rate. Other details revealed by the poster include a 5G processor, 5000mAh battery capacity and 256GB of storage . It also has an audio jack and a USB-C port at the bottom and will be available in blue and black. 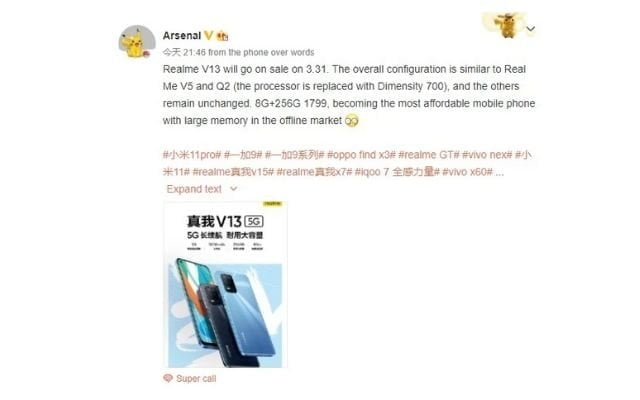 According to the source that posted the image, the phone shares similar specs to Realme V5 and Realme Q2 but has a processor and Dimensity 700 under the hood. The man also added that the phone will have 8GB of RAM and a price tag of ¥ 1799 (~ $ 275). It goes on sale on March 31 and will be sold in the company’s offline channels.

Smartphones share our data with Google and Apple every 4 minutes, even if we don’t use it