Huawei is struggling to maintain its presence in the smartphone market; compared to previous years when the company was a leader in the mobile phone industry, its future is now somewhat uncertain. Instead of bringing in mid-range phones, the company reiterated that it will focus on the flagship device segment.

The Chinese OEM will unveil the P50 series very soon . It was rumored that these devices would arrive in March, but due to problems with American bans, the company reported postponing the date to April 2021.

The fact is that the Chinese company expected to reach an agreement with the US government with the Biden administration, but so far there are no signs of opening from the new president. In the midst of the crisis, the company is preparing the ground for its proprietary operating system, HarmonyOS , which will replace Android on its smartphones. Probably, the new software will arrive together with the new range of flagships for 2021.

Huawei Mate 40: will support the fast charge at 66 W

EMUI 11: devices will be able to update to HarmonyOS

A Huawei staff member with the @ FoxSister moniker revealed that Huawei will hold two events next month. The events will take place between 22 and 27 April . The themes of the press conference are: “ Wisdom connects everything, wisdom and hundreds of people ” and “ Deconstruction of art, meets the future “. 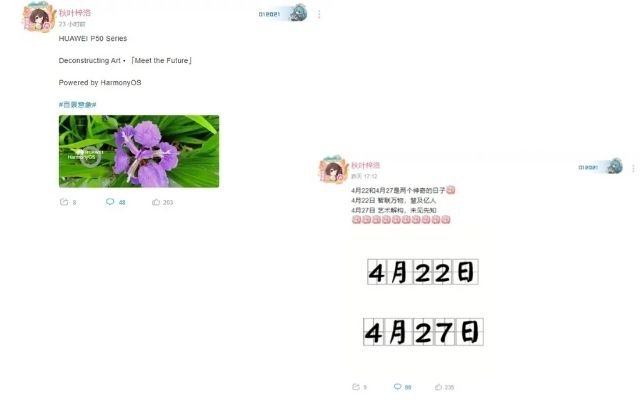 The first event will likely represent the release of HarmonyOS 2.0 . For the uninitiated, this should debut as a new Huawei smartphone operating system. Additionally, @ BalanPanda revealed that the company will hold its annual Huawei HDC Developer Conference ( HDC ) from April 24-26. The company will provide more details on its HongMeng system, ergo it is assumed that the firmware of the Chinese giant can arrive in the days indicated above.

As for the P50 flagship range , we know that it should arrive on April 27th; it is not clear this date refers to the Chinese or Global version. The global release is rumored to be in May.

The new series will come with distinct variations of the Kirin 9000 chips. Due to the shortage of chips, they will mostly be sold in limited quantities. Aside from that, the company will likely release three models: P50, P50 Pro, and P50 Pro + .

Harmony OSHuawei P50
You might also likeMore from author
News