Home News Coronavirus: the consequences on the tech world

What will be the medium term consequences of the Coronavirus epidemic on the world of Tech ? The demand had been dormant for days and today’s alarm bell rang in Cupertino (Apple has warned of possible delays in sales that could weigh on quarterly data) has generated fibrillations on exchanges all over the world.

A TrendForce analysis now tries to shed more light on what the impact of the epidemic could be on the world of technology, estimating the damage based on the projections referring to what is known today about the trend of infections.

Coronavirus: the impact on the tech world 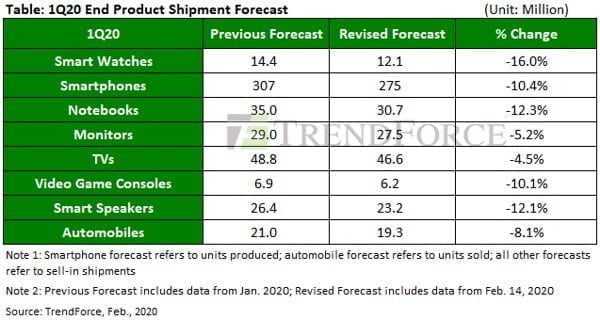 -8% forecast for the automotive world, -12% for the notebook market . All this, however, in the perspective of a trend slowing epidemic and in the hope that the quarantine measures adopted all over the world are sufficient to curb the epidemic. The longer the duration, the greater the general impact on the economy: these damages are now evident, but the situation can be preserved if from the health point of view it will be possible to curb the alarm as soon as possible.