Lenovo declassified specifications Z6 Pro the day before the announcement

In the announcement of the smartphone Lenovo Z6 Pro on the Internet, there were many rumors and assumptions about the stuffing upcoming gadget for release. The day before the presentation, an official source unexpectedly became the source of a major leak. Vice-President of the Chinese branch of the Lenovo Group published on the social network Weibo detailed characteristics of the future flagship of the company. 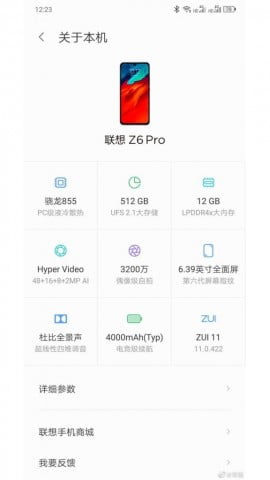 According to today’s publication , Lenovo Z6 Pro is built on the basis of the newest mobile platform Qualcomm Snapdragon 855. According to the manufacturer, the novelty received a processor with additional factory overclocking and a liquid cooling system. The top configuration of the smartphone will be equipped with 12 GB of RAM and 512 GB of internal memory. The diagonal AMOLED-display with built-in fingerprint scanner and a drop-shaped cut-out for the front wheel is 6.39 inches.

The main camera module of the device with support for AI functions consists of four sensors. The main 48-megapixel sensor is complemented by three auxiliary with a resolution of 16, 8 and 2 megapixels. Judging by the configuration, the previously announced 100-megapixel images will be “glue” together using software algorithms. A single 32-megapixel selfie camera is responsible for selfies and video calls. Details of the technology HyperVideo will be disclosed later during the presentation. Earlier, an official teaser appeared on the Internet, showing the design of the device in close-up.

The sound capabilities of the Lenovo Z6 Pro are stereo speakers with support for Dolby Audio surround sound technology. The battery capacity of the upcoming new product is 4000 mAh. Out of the box, the gadget will run Android 9.0 Pie with a ZUI 11 graphic shell.