Home Android Tips and Tricks Crashing Android App: Here’s how to fix it

If we are Android users, and we make a massive use of apps of all kinds, perhaps we will have noticed in the last few days of a rather bizarre behavior of our smartphone, due to an oversight by Google in the management of updates of the popular mobile operating system. 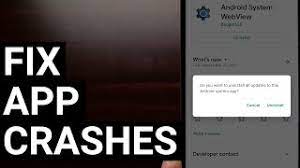 Many users, through channels like Reddit , have reported an incredible wave of Android apps crashing on their Android device, apparently with no obvious explanation and in any case not linked to remote attacks or hidden malware. What made users suspicious was the fact that the malfunction concerns apps from many different manufacturers, even very heterogeneous from each other: from Amazon services to those of Instagram, from Gmail to Twitter, nothing seems as reachable as it has always been.

Being a problem that then spread like wildfire, Google decided to collect the reports received and to investigate in depth the recent updates to the operating system, finding the solution to the enigma in one of them. The culprit, as reported by Google itself on the official pages , is the Android System WebView component , a function that allows the apps installed on our device to view web pages and data downloaded from the web in general, on the version 89.0.4389.105 just released by Google .

Android app crashing: how to fix it

If on your Android devices you are still experiencing the problem of apps crashing for no apparent reason, all you have to do is verify that the version of Android System WebView installed on your devices is 89.0.4389.105 (which has been fixed and does not have the bug described on the page) , otherwise update it via the Google Play Store . It is also recommended to install the latest version of Google Chrome , also through the Google Play Store.