Xiaomi has unveiled the fourth generation of Black Shark gaming smartphones. Of particular interest is the Pro version, which has received flagship stuffing, including a top-end Snapdragon processor, custom storage and a battery with ultra-fast charging support.

Black Shark 4 and Black Shark 4 Pro are almost identical in appearance and differ in some technical characteristics. Both feature a 6.67-inch display with Samsung’s advanced E4 AMOLED matrix. The screen has a Full HD + resolution and an adaptive refresh rate of 144 Hz. The sampling layer of the touch layer is 720 Hz, which provides an instant response to touch. HDR10 + support is also announced. The front camera is built into a miniature hole in the center, and stereo speakers are located at the top and bottom ends. In the Pro version, the stereo speakers are much more powerful.

The regular Black Shark 4 received a Snapdragon 870 processor, LPDDR5 RAM and UFS 3.1 storage. The Black Shark 4 Pro has a more powerful Snapdragon 888, the same RAM, but a hybrid drive with UFS 3.1 and a custom SSD is used as storage, thanks to which the read speed is increased by 55%, and the write speed is increased by 69%. The manufacturer promises faster game installation and data transfer. 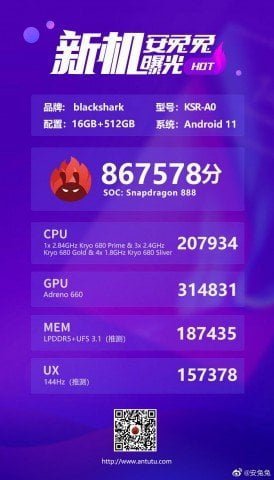 Both smartphones are equipped with a 4500 mAh battery with support for fast 120-watt charging. The manufacturer promises to charge up to 50% in just 5 minutes and a “hundred” in less than 15 minutes. Regardless of the version, the corresponding 6A power adapter is included.

The main camera in both smartphones is triple, but the main module is different. In the Black Shark 4, it has a resolution of 48 megapixels, and in the Pro version – 64 megapixels. The other two cameras are identical regardless of the model: an 8-megapixel wide camera with a 120-degree viewing angle and a 5-megapixel macro camera.

One of the unique features of smartphones is the physical trigger buttons on the right side. They slide out using special sliders. You can use them not only for more convenient control in games, but also for quick access to various customizable functions. The fingerprint scanner is built into the power button. Both devices have a 3.5mm headphone jack. The peculiarity of the “proshka” is LED illumination on the back cover.